This is the second in an ongoing series about understanding advanced statistics in baseball.  Each volume will take an advanced stat, explain it, and contextualize it in the hope that the basic fan can better understand the numbers that drive the game today.

It’s inevitable.  You’re calmly debating with a relative as to why this player is better than that player, or if this player played in this time how they’d do, yadda yadda yadda…

Don’t roll your eyes too hard though, because there’s merit to contextualizing the accomplishments of players throughout the evolving history of baseball.  Walter Johnson pitched 110 shutouts in his career, but was he really THAT much better than Lefty Grove, who only pitched 35?  Nolan Ryan is the all time leader in strikeouts, and yet there’s a legit argument that Curt Schilling is a significantly better pitcher.  Baseball has evolved over time, and advanced stats have evolved with it, as a way to better compare pitchers without all the noise of era-specific anomalies.  Thus, we have Adjusted ERA+.

ERA+ is a “weighted” statistic, meaning that it uses a scale to measure a pitchers performance, and sets “100” as average.  Anything above 100 is considered good, anything below it, bad.  It factors in the average ERA of the league for the years the pitcher was active, and the offensive factors relative to each ballpark the pitcher played in.  The formula for it looks like this (as per Fangraphs):

ERA+ is a way for historians to better evaluate pitchers performances, and for evaluators to get a more complete picture as to how a pitcher is doing relative to his surroundings.  For example, take a look at two pitchers stat lines from 2018:

So what gives?  Pitcher B obviously had a great… more like HISTORIC season.  300 strikeouts has only been done by 17 pitchers since 1900.  How did pitcher A have a comparable season to that, with less innings pitched and 127 fewer strikeouts?

Well, Pitcher B is Max Scherzer, and Pitcher A is Kyle Freeland.  The latter pitches in Coors Field, home to the Colorado Rockies, and the most hitter friendly park in baseball.. by a lot.  The stadium itself is so elevated, that the air thins out, causing balls to travel farther and pitches to flatten out.  This gives Freeland a totally different set of challenges to Scherzer that can’t be quantified by traditional metrics like ERA and WHIP.

ERA + also allows us to compare pitchers on a broader scale, allowing us to more objectively compare players across different eras.  Let’s do a similar comparison to the one above, but let’s use two pitchers with seasons 100 years apart.

In this case, ERA+ allows us to see that a lot has changed in 100 years in baseball (and, ya know.. EVERYTHING), but the comparative performance stays constant.  Both of these pitchers were more than twice as good as their fellow hurlers that season, but for different reasons.  Pitcher A threw over 100 more innings than Pitcher B, had notably less strikeouts, but also an ERA lower by almost a half a run.  When you look back, that was a product of the times during the “dead ball” era, and the stats would dictate that.  Pitcher B is striking out batters at a much higher clip, but also during his time, ballparks are noticeably smaller, and players are more geared to hit home runs.  By 1918, Babe Ruth had compiled all of 20 home runs for his career.  In 2018, Barry Bonds had hit 762.  This stat allows us to acknowledge the differences in the times, but also objectively say that these two pitchers, while regarded as two totally different pitchers for their careers, had similar years. 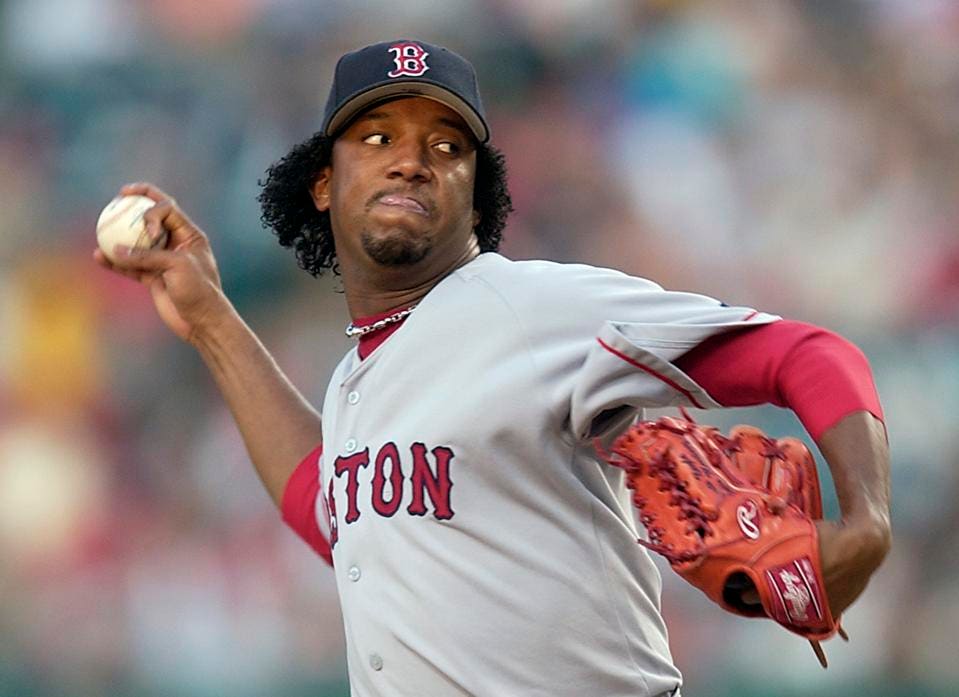 It wasn’t just what Pedro was able to accomplish, it was WHEN he accomplished it.  His first season in 1992 to his last season in 2009 were arguably the most offensively-driven years in the history of the game, and included the infamous “Steroid era”.  While the league average ERA during this time was 4.76, Martinez finished his career with a sparkling 2.93.  This, coupled with his longevity (he had 8 seasons of 190+ innings pitched) allowed him to solidify his place as one of the greatest ever, even when compared to legends like Lefty Grove (148), Christy Mathewson (136), and Greg Maddux (132).  The little guy could shove, and this number proves it.